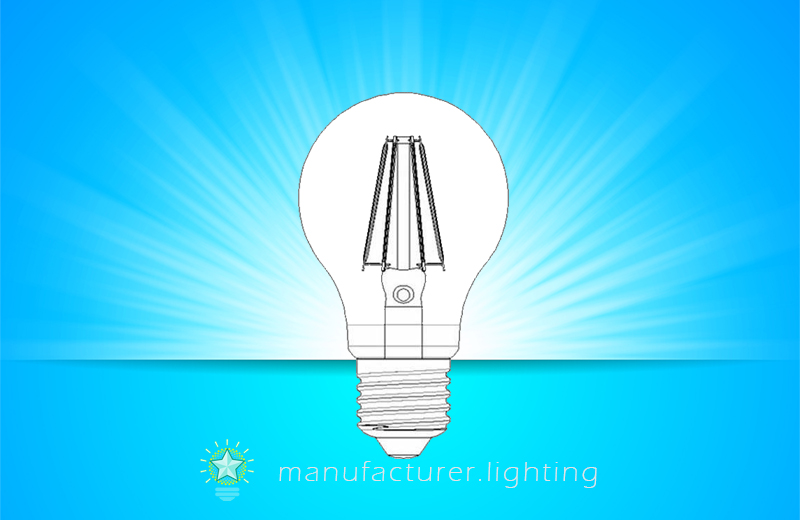 An LED filament light bulb is an electric light bulb which produces light with an LED that is shaped to mimic the filament of an incandescent light bulb. LED filament bulbs are a fantastic combination of the new LED technology and vintage incandescent bulb technologies. Light is soft and uniform, safe to eyes, suitable for general and decorative illumination for ceiling fixtures, wall sconces, pendant lights, etc. A truly modern but retro styled classic clear glass light bulb with state-of-the-art LED filaments to be employed in open shades and architectural lighting in which a standard LED bulb might look unnatural. If you love the appearance of the old-fashioned lightbulb but want the electricity price of LED lights, then this light bulb is the perfect compromise.

Traditional LED bulbs failed to meet the aesthetic requirements of traditional luminaire manufacturers, which paved the way to LED filaments emergence on the market. The LED filament style Edison bulb definitely has the look of the old school filament bulbs but on the other hand being newer technology in comparison and to many this can be a steam-punk type of product! An LED light bulb is more compact in size and the lumen output can appear far more sensitive to operating temperature. An LED lamp accordingly will need heat dissipating features for effectively dissipating heat to prevent the LED from overheating and failing. Typical LED light bulbs require heavy metal heat sinks which make a table lamp top heavy or cause stress to a socket made for a much lighter bulb. They also limit the beam angles and can cause shadows in many types of fixtures. An LED filament is able to dissipate the heat over a substrate. The result is a remarkably efficient lightweight LED light bulb that may resemble and provides the same instant-on incandescent quality of light. The full glass design is additionally significantly better, allowing for no bulky heat sink, and making the bulb about the same weight as an incandescent. The LED filament technology features a 360 degree beam angle light pattern which the standard LED bulbs can't.

An LED filament is composed of a series of LEDs on a transparent substrate, known as Chip-On-Glass (COG). These transparent substrates are constructed of ceramic, glass, or sapphire materials. Sapphire is the most desired filament material because of its high mechanical strength, good thermal conductivity (compared to glass) and perfect thermal expansion coefficient match with the LED die. Sapphire filament has superb thermal conductivity since it can even endure 2050 degree high temperature. Furthermore, regardless of how the internal temperature changes, problems such as deformation or fracture won't happen as a result of thermal expansion and contraction. Ceramic comes to the second due to its good thermal conductivity and affordable cost. Though glass is transparent and doesn't conduct electricity nevertheless its awful thermal performance is deadly for LED bulb. Glass and ceramic substrates continue to be used due to low cost and broad availability compared to sapphire.